What is the most beautiful village on Lake Garda?

Lake Garda is like a magical chest capable of giving a big variety of surprises to tourists. The experiences that accompany its discovery are not limited to its crystal clear waters, the relax, the hot springs, and the several historical villas that face it, but they also include many medieval villages that allow us to know every unknown corners of the lake and its inhabitants.

Among stone houses, cobbled alleys, wooden doors, the rustic atmosphere, artisans that work in their courtyards, Christmas markets, typical products and historical displays, we’ll discover which is the most beautiful village of Lake Garda, counting those that were mentioned in the guide “The most beautiful villages of Italy” (“I Borghi più belli d’Italia”).

One of the most beautiful, most famous, and most visited towns of Lake Garda is certainly Limone del Garda, on the Brescian coast, 35km from the town of Salò and 9.5km from Riva del Garda, built along the 45 bis Western Gardesana Highway. It is known as the village of lemons and lemon farms, since it houses many greenhouses built on pylons on the rocky mountainside and covered in wooden windows. These greenhouses gave the town its name. In the village you can find lemons everywhere, from souvenirs to liqueurs like limoncello, they even appear on the town’s coat of arms. The most famous lemon farm that you can visit is the Limonaia del Castel, which has maintained its original 1700’s structure and is in the centre of the town.

A walk among the paved alleys and galleries of this village allows you to discover many historical buildings like the Church of Saint Benedict (Chiesa di San Benedetto) and the Church of Saint Rocco (Chiesa di San Rocco), which is also built on the rocks, and from whose terrace you can enjoy an enchanting view over Lake Garda. Another building of historical importance is the Parco Villa Borghi, whose villa today houses the town hall.

The village also has a gorgeous lakeside boardwalk where you can stroll or stop for lunch in one of the many restaurants, as well as four free access beaches with gravel or stones where you can enjoy the summer sun. Limone del Garda is also the starting point of the bike path suspended over Lake Garda, which only opened in July 2018 but has already become a point of reference for all lovers of bicycles, family walks, and cycle tourism.

Following the 45 bis Highway that from Limone leads to Salò you can take the exit that goes up the mountain towards Tremosine, known as the “village of thrills”. The peculiarities of this widespread town, divided among 18 different hamlets on the mountain, are mostly two: one is the Road of the Forra that unwinds among rocks, waterfalls, gorges, and galleries, offering breathtaking views of the lake. Travelling down this road, immortalised in James Bond movies, is by itself a unique adventure.

Proceeding up this path you’ll reach the hamlet of Pieve where you can find the “Thrill Terrace” (Terrazza del Brivido), a structure 350m high hanging over the lake where you can admire both the castle of Malcesine and the imposing tip of Mount Baldo on the opposite side of the lake, in the province of Verona. It is also an ideal place to enjoy an aperitivo.

Travelling only a few kilometers allows you to move from an altitude of 65m to nearly 2000m, and the landscapes and vegetation change vastly as well. In Tremosine you can admire green meadows, olive tree farms, and the particular “round stairs” (“scala tonda”) that you can also find in the Hamlet of Pieve. 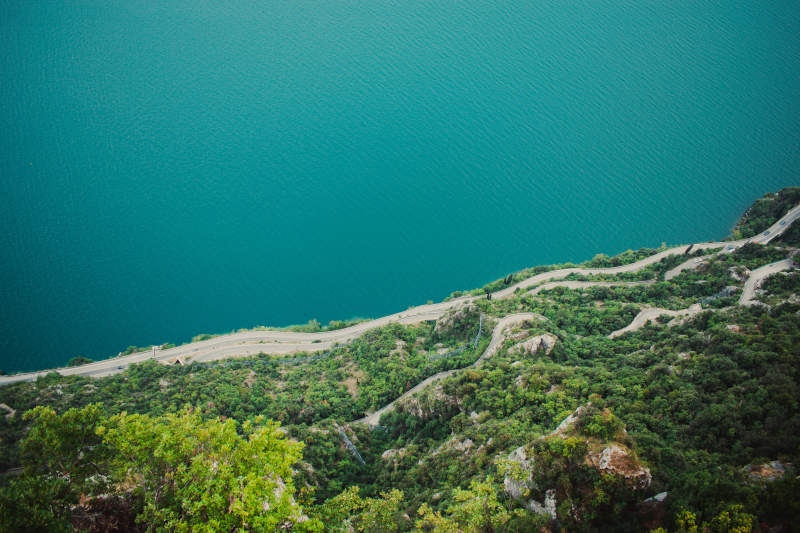 One of the most beautiful villages of Lake Garda is Borghetto sul Mincio, in the province of Verona, part of the town of Valeggio, in the valley of the rivero Mincio. Here you can find the Visconteo bridge, a fortified dam built by Gian Galeazzo Visconti in 1393 that for centuries has represented a crucial joint for the movements of people and merchandise. The battles that have been fought in the village of Borghetto del Mincio are many. The hamlet has seen conflicts with the Lombards, the Venetians, Napoleon’s army, the Risorgimento fighters, and the Austrians.

To this day Borghetto sul Mincio has retained its ancient mill village charm, to the point of being known as “the village of the mills”. Its houses on the waters of the Mincio river make the connection with Venice clear. In this handful of houses there are artisanal workshops, cafés, and restaurants that are famous for their hand-made tortellini known as “Love Knots” (“Nodo d’amore”). Near this village there is the Garden Park Sigurtà, one of the most beautiful gardens of Italy. 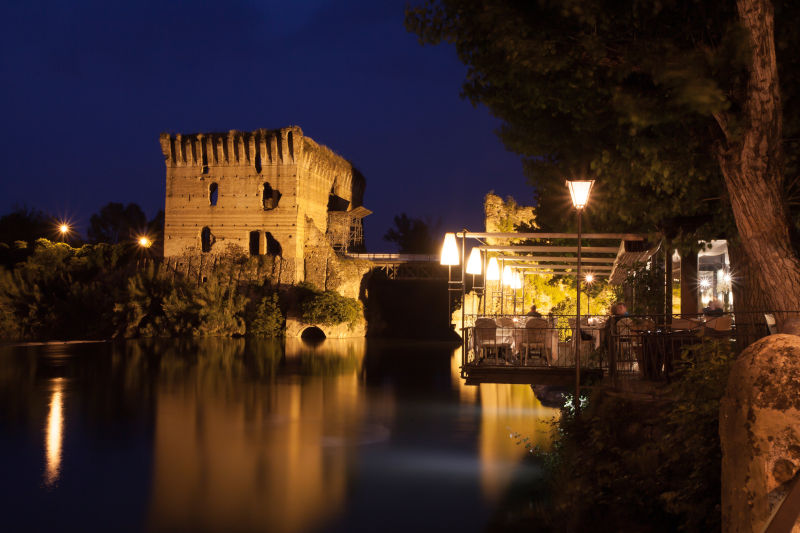 Cassone is a village that was founded in the distant 1022 and is today a hamlet of the town of Malcesine, on the Verona coast of Lake Garda. This graceful medieval village owes its popularity to its ancient tower, the small harbour where the traditional yearly Regata of the Bisse starts, and the fact that it houses the shortest river in the world: the Aril river that from the spring to the mouth only travels for 175m. Visitors can observe how the Aril river is born in the heart of the hamlet of Cassone di Malcesine and flows into Lake Garda soon after. The Aril river is one of the 25 emissary rivers of the Lake.

The Aril river is considered a river through and through because it has a constant and continuous flow of water. In its brief course it passes through 3 bridges and it has a small waterfall. The river has been converted into the symbol of the village of Cassone and in the Christmas season it becomes the platform for a graceful floating nativity scene that extends from one bank to the other. 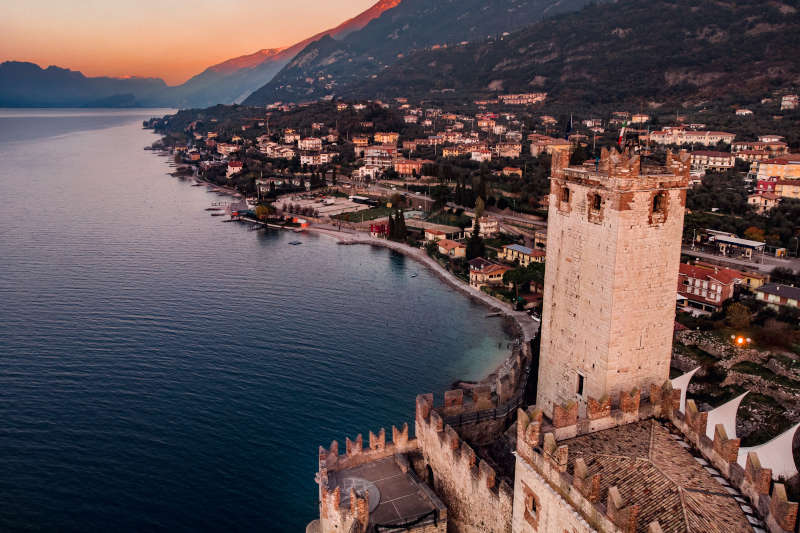 The Trentino coast is home to one of the most beautiful villages of Lake Garda, Canale di Tenno. It’s a village that was founded in 1211 and is 600m above sea level. To this day it maintains its typical medieval structure, with stone houses, cobbled streets, arches, courtyards, and sometimes barrel vaults, or “avvolti”, that connect the various buildings.

From this spot you can admire a splendid sunset on Lake Garda and in the summer the historical event “Rustic Middle Ages” is organised, where the entire village dresses up and tourists have the possibility to discover medieval customs and traditions thanks to courses, jugglers, minstrels, exhibitions, concerts, typical local dishes, and artistic shows. The atmosphere in the village of Canale di Tenno is also magical in the Christmas season when the streets are lit up with the lights and colours of its classic market. 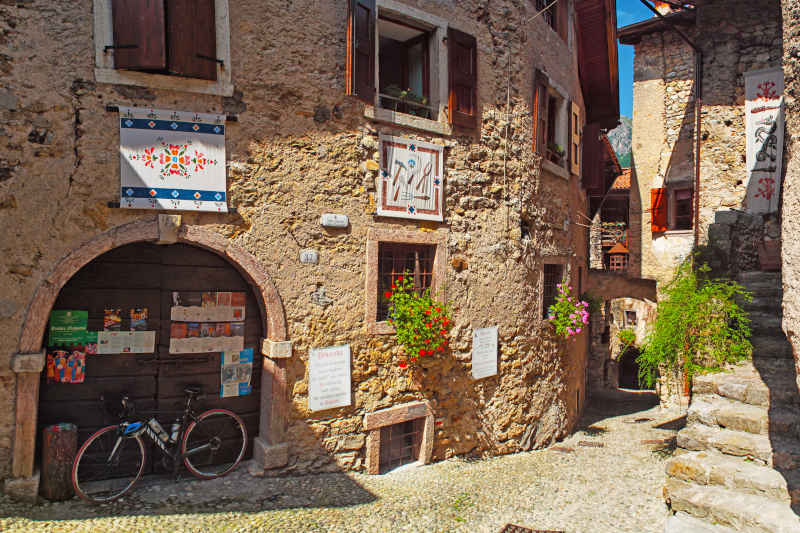 There are many towns around Lake Garda that are part of the special ranking in “The most beautiful villages of Italy”. One of these is the hamlet of Rango nel Bleggio, in the town of Bleggio Superiore, 13 km North of Canale di Tenno, in the Province of Trento.

The streets in the village were built with the ancient cobble technique known as “salesà” and it guides those walking on it to the courtyards, galleries, and the entrance halls of this small medieval jewel whose houses are placed one against the other.

In this town you can also find the peculiar School Museum (“Museo della Scuola”) where you can observe the typical wooden racks where products of the valley like the Ciuiga del Banale, a sausage of pork and turnips, were set to dry. Despite being only a few kilometres from Garda, this village is surrounded by typical mountain landscapes with prairies, mountain pastures, fountains, and houses with pitched roofs and geranium plants on their window sills. 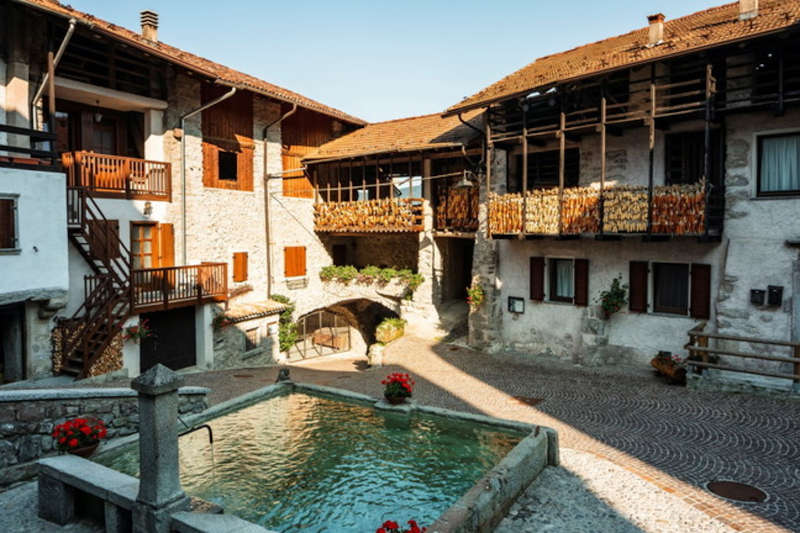 A special mention for Castellaro Lagusello is in order, a small perfectly preserved  medieval town with whom we move away, though not by much, from Lake Garda, towards the South. This small paradise is in the Province of Mantova near a heart-shaped lake (Lagusello) and in the 11th century it was a home to military garrison known as “Castelliere”, which gave the name to the town. 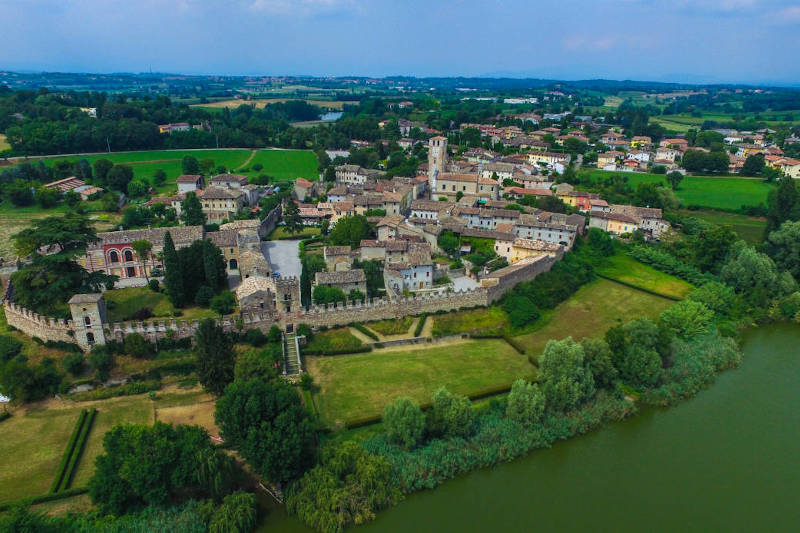 A walk in this old timey village allows you to discover the square clock tower, the brick coloured alleys with river rocks, the Guelph walls, the stone houses, and the Baroque Church of Saint Nicholas (“Chiesa di San Nicola”). Among the flavours you can’t miss during a visit in Castellaro Lagusello are the pumpkin tortelli (“tortelli di zucca”) and the salami of Monzambano (“Salame di Monzambano”).

Credits: the last two images were taken from the websites livelagodigarda.it and siviaggia.it