The feast of the assumption is one of the most celebrated holidays of the year, anxiously awaited by everyone as it represents the heart of summer holidays, and Lake Garda holds the sceptre every year as the capital of the festivities of august 15th, with a series of events based on music, gastronomy, ad the unmissable fireworks that light the summer evening skies of the most beautiful lake in italy with a thousand colours.

The origins of the Feast of the Assumption

The feast of assumption was established by octavian augustus, the first roman emperor, in 18 b.c. And the italian name, ferragosto, is derived from the latin feriae augusti, “the rest of august”. It was later on assimilated by the catholic church in the 7th century as the celebration of the virgin mary’s recurring assumption. Nowadays august 15th is synonym of outdoor field trips, rich lunches, relaxing on the beach, or hiking up a mountain.

In this scenario, Lake Garda is one of the most sought-after destinations for vacationers, as it can unite the charm of its crystal clear waters and its pre-alpine scenery with its rich variety of beaches where you can lay and bathe in the sun, luxury resorts especially distributed along the western coast between Salò and Limone, the delicious local gastronomic products, and an infinite list of events for the whole family.

The Grand Concert of the Feast of the Assumption of Salò

The town of salò proposes the Grand Concert of the Feast of the Assumption played by the town’s band, who in 2018 has celebrated its 200th anniversary since its founding.

The exceptional location is that of the cathedral’s square, where the wonderful historical scenography pairs beautifully with the natural acoustics of the place. Art lovers in salò can spend a pleasant day by visiting Musa, the Museum of salò, opened in 2015.

In the current season until the 8th of december there is the exhibit “Contemplations”, curated by the famous art critic Vittorio Sgarbi.

A little to the north is the vintage market of Gardone Riviera, a must-see, since for august 15th it is held on the lakefront boardwalk. To match it you could visit the Vittoriale degli Italiani, the monumental complex that holds the remains of the poet Gabriele d’Annunzio.

The Fireworks Show on Lake Garda

One of the main events with fireworks on lake garda is the annual pyrotechnical show offered by the San Martino della Battaglia Wine Festival, near Desenzano del Garda.

In the town of Garda is the Palio delle Contrade, the traditional nightly competition on the bisse, ancient boats typical of lake garda, concluded in the magnificence of fireworks.

Another unmissable event is the Yellow Night on Limone del Garda, celebrated on the 14th of august instead of the 15th. In this evening dedicated to lemons and their bright yellow colour, the streets of the town are filled with people attracted by the numerous events and entertainment for young and old, with music and shopping under the stars preceding the clou event of the fireworks, who create a show of magical reflections in the water at the feet of the mountains around them.

Another town that offers an excellent pyrotechnic show is Manerba del Garda, with its Manerba Magic Night. This is one of the dates we’ll be following with our boat tour dedicated to the admiration the pyrotechnical show under the starry sky!

One of the best ways to enjoy a fireworks show on lake garda is by viewing it on a boat, cradled by the calm lake waters. 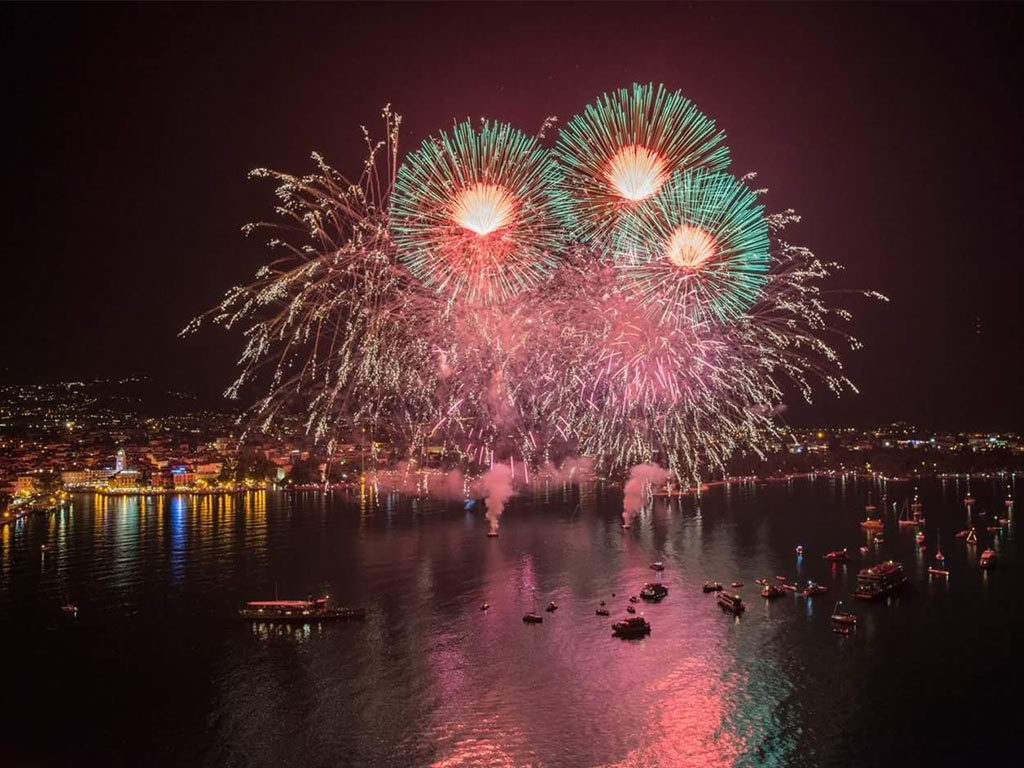 Other events on Lake Garda on the Feast of the Assumption

The village of Tignale is the stage of the Festa dell’Ospite (Party of the Guest), with music and gastronomy to celebrate the feast of the assumption between the sacred and the profane, while in Soiano they celebrate one of the most beloved festivals of lake garda, the historical Festival of San Rocco, with musical and gastronomic events inside their medieval castle.

One of the most popular locations for august 15th is Sirmione, who offers its numerous tourists, both italian and foreign, unique attractions like its splendid Scaligero Castle and a visit to its celebrated Catullo’s Grottos.

In trentino the celebrations continue all throughout the month of august with a series of events in Riva del Garda like the Notti di Fiaba (Fairy Tale Nights), with its 40 minute long pyrotechnical show.

During the week of august 15th the main touristic locations of lake garda are nearly assaulted by the crowds, so it’s best to properly book your sojourn there in advance in order to enjoy your holidays at their full potential.