The most beautiful hiking trails of Lake Garda

Many trekking trails of Lake Garda allow us to discover unknown and mysterious glimpses of the lake, with panoramic spots where you can view it in complete solitude and paths that go into the splendid woods that lead to special places. Lake Garda is ideal for mountain bike lovers as well as hiking enthusiasts, and there are many combinations of bike and hiking trails surrounding it.

The town of Salò is the starting point for several hiking trails on Lake Garda. Behind the town there is the Parco Naturale dell’Alto Garda Bresciano, whose paths allow you to reach the peak of Mount San Bartolomeo, which is 568 meters above sea level.

One of the most used paths is the sentiero CAI n.17, also known as Sentiero della Pineta (Path of the Pine grove), which from Salò goes up the slopes of Mount San Bartolomeo, reaching the picturesque geological formation called “La Corna”, at 350 meters above sea level. It is a rather simple trail that in an hour lets you enjoy the peerless view of the lake and the gulf of Salò from many panoramic points. The view extends to the city of Sirmione. Photos of Lake Garda that can be taken during this hike are spectacular.

This path is only the beginning of the trekking path of Lake Garda known as Bassa Via del Garda or sentiero Montagnoli, which starting from Salò, reaches Limone del Garda. From start to finish this trail is 70km long and can last about 2/3 days, reaching a maximum height of 900m above sea level. In some parts it is only recommended to expert hikers. 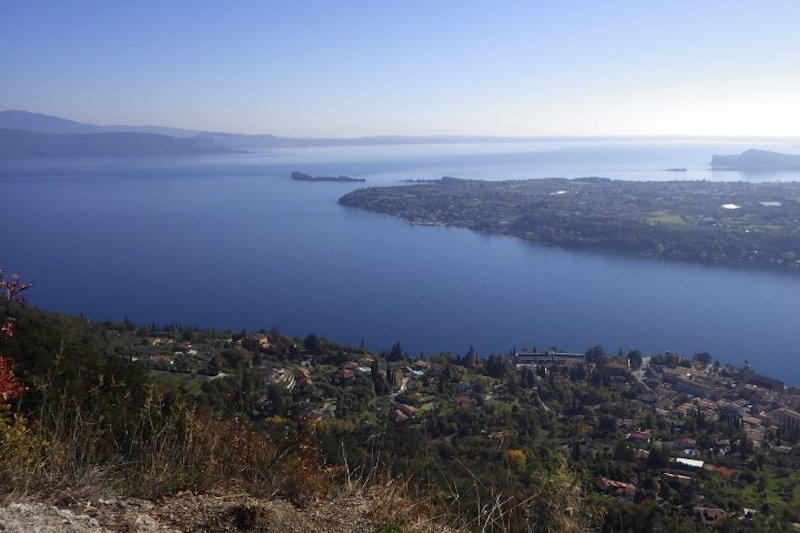 Another trail that is popular with hikers on Lake Garda is the one that lasts about an hour and a half and leads from Salò to the sanctuary of the Madonna del Rio, which can also be reached by car. This walk, like many others, starts by climbing up the Scala Santa (Holy Stairs), a historical monument from the early 1900’s, that with its 145 steps allows you to reach the Strada Gardesana Occidentale (the Western Gardesana Road) from which you can enter fields and olive groves.

The church of the Madonna del Rio was built in the 18th century in a cave where according to witnesses the Virgin Mary has appeared. From here you can find another hiking trail called “la Strinada”, which in an hour and a half leads to the passo della Stacca. From here you can enjoy a spectacular view of the lake. It is also the place where the paths of the circuits of Serniga, San Bartolomeo, Renzano, and Bagnolo meet. It is a pleasant walk even in the hottest months of the summer, since it is very shaded. 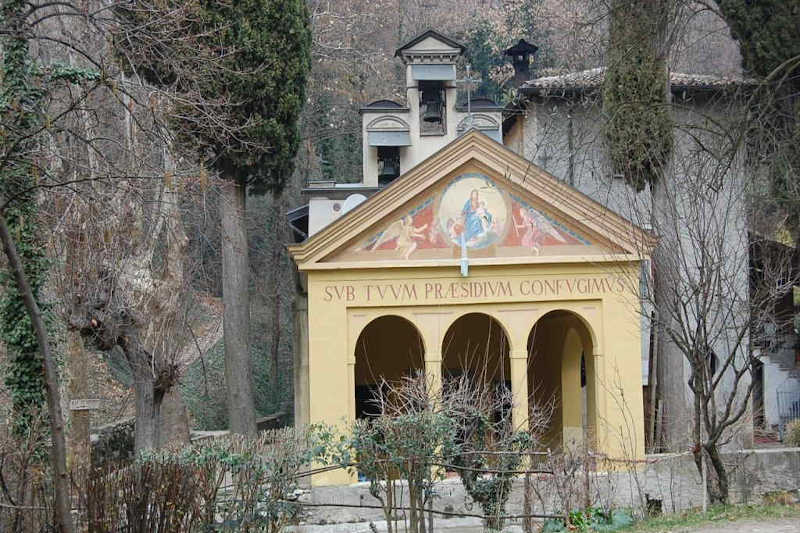 Other trails and paths near Salò

Not far from Salò, near Toscolano Maderno, is the Valle delle Cartiere (Paper mill valley) that offers a 9 km long itinerary that can be walked in about 3 hours, in order to reach this territory of historical interest, among ruins of ancient paper mills and mountain streams.

From Gargnano you can reach Valvestino by car, which offers many excursion trails, paths, and walks suitable for families who want to discover the characteristic Cima Rest hay barns, but also the more demanding trails for experts.

Along the path that leads to Valvestino you can park your car in the town of Sasso, where the path to the Eremo di San Valentino starts. It is one of the favourite trails of hiking lovers and it lasts about 1 hour and 20 minutes. The small rustic church of San Valentino was built under the rock, and here you can also find natural terraces that allow you to look over the town of Gargnano.

In the southern side of Lake Garda there is a very beautiful hiking trail that is the naturalistic path of the Riserva della Rocca di Manerba del Garda. All paths of this natural reserve are well marked and offer spectacular views of the Lake. 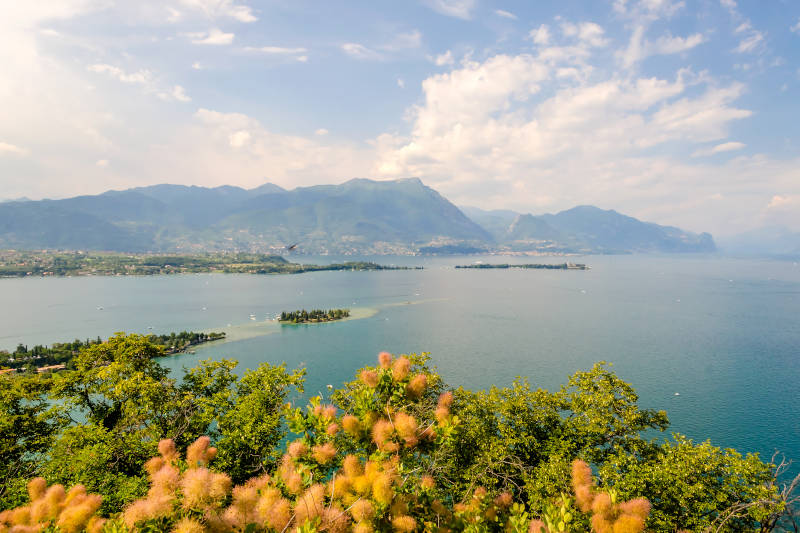 Other Hiking Trails of Lake Garda you can’t miss

The hiking trail from Riva del Garda to Lake Ledro allows you to discover the beauties of the Trentino side of Lake garda. The paths are all different and all easy or medium in difficulty. One of the most striking is the one that follows the panoramic Strada del Ponale, an ancient carriageable road built in the middle of the 1800’s to facilitate links with the Ledro Valley, which has been re-opened for pedestrian and bicycle traffic in 2004. The road is sinuous and from one curve to another it’s possible to enjoy fabulous glimpses of the crystal waters of Lake Garda.

Not far from Riva del Garda is the Busatte Tempesta Trail, a naturalistic path opened in 2005 that offers a splendid view of the northern side of Lake Garda. The roughly 5km long ring trail with a height difference of about 300m can be done, roundtrip, in a total of 3 hours. 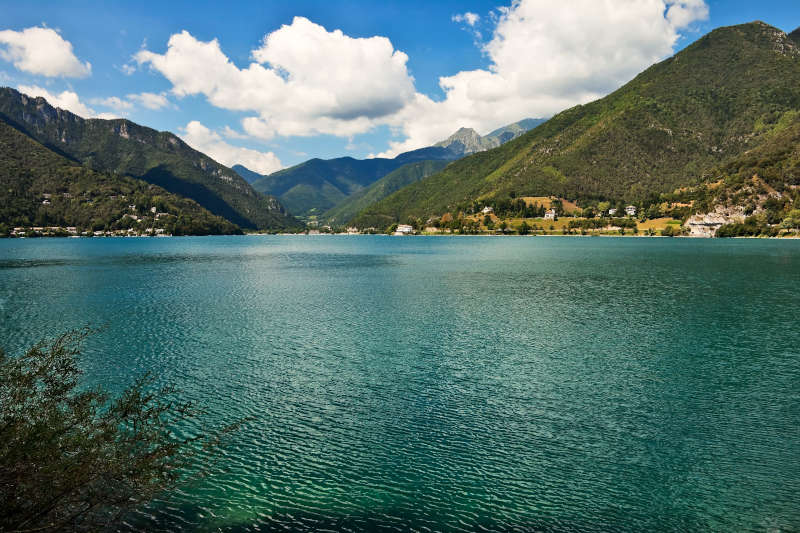 Mount Baldo is a magnet for hiking lovers on Lake Garda, thanks to the many paths of various difficulties it offers. Here many lovers of Nordic Walking unite, an activity that is practiced in many countries in Northern Europe, and is very useful to tone the entire body, while enjoying the splendid landscape of Lake Garda.

The hiking trails of Mount Baldo on Lake Garda are also ideal for families with children. The Path of the Colma for example is an easy walk of about 40 minutes that leads to a lookout with a view of the Dolomites. 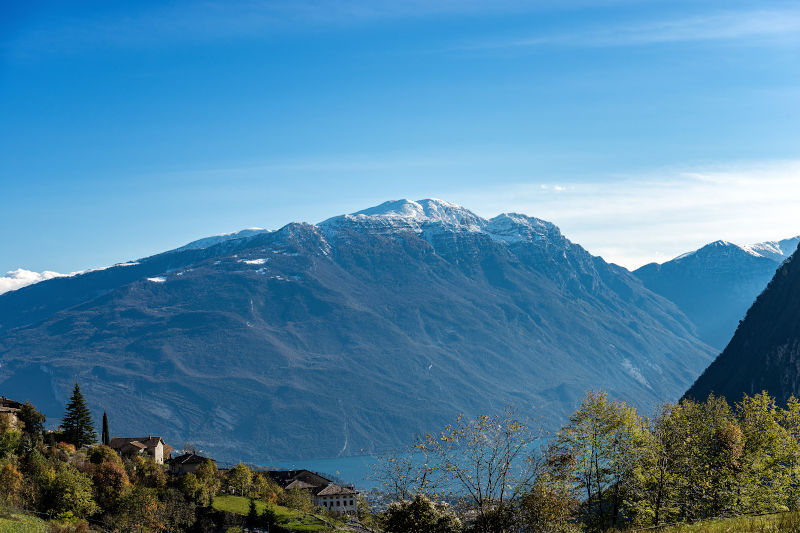 It’s also possible to go hiking on Lake Garda during the winter, thanks to the warm climate of the area. Before embarking on one of the paths it’s better to verify through several local information centres the updated conditions of the chosen trail, whether or not it’s accessible and what’s the expected weather.

The marked trails are mostly simple or not very demanding, but it’s always better to tackle them with adequate equipment and clothing (boots, sticks, layered clothing, windbreakers, sunscreen), especially if you’re planning on walking with children, which can still be done in many trails. The paths are always well marked and free from danger.

Credits: images of Mount San Bartolomeo and of the Sanctuary of the Madonna del Rio were taken from waterwind.it and tuttogarda.it